Honey has been a recurring theme on this tour.  James learned how to catch a swarm of bees while we were at Wood's Hole Hostel.  Prior to that, he met a man who shared tips on how to tend bees.  Across the street from Four Pines Hostel was the most extensive collection of bee hives I've ever seen.  James gifted me with a jar of local honey today.

Today's post is titled "Queen Anne and the Vespa mandarinias."  I had intended to call it "Queen Anne and the Worker Bees," but after I learned worker bees are all females, that hardly seemed appropriate.  "Queen Anne and the Drones" wouldn't have fit either since the drones are known for lazing around the hive waiting to mate with the queen.  Though in some sense, drone may have been appropriate because once the drone has done his duty, he dies.  Perhaps Queen Anne is waiting to make her move and ensnare the two males remaining on this Tour de Virginia, discarding them as she forges ahead to the finish.

While Eric and Troy are duking it out with one another, chatting it up, and intent on not letting the other get too far out of sight, Anne spends the day in relative solitude.  Unlike Troy, who is nearly always connected to some electronic gadget or another, Anne passes the time tuned in to some other thoughts and sensations.  I've often asked Eric what he thinks about all that time while he's out on the trail.  He thought that was quite a bizarre question.  I wonder what occupies Anne's mind all those hours she's out on the trail by herself.

I saw Eric and Troy at the 20 mile mark today as they crossed VA 220 near Daleville.  It was hot, extremely hot, and they were more than grateful for the ice cold sodas and the chance to fill up their packs with ice water.  When Anne came along an hour and 15 minutes later, she too was grateful, telling me that if no one had been at that spot, she would have considered ducking into the convenience store to purchase a lemonade.  She wondered aloud if that would be against the rules.  Seriously?! She's worried about some manner of rules on a day like today when any normal ultrarunner covering 40+ miles in 100+ heat would be seeking any form of hydration necessary to maintain some sense of equilibrium.

I next saw the runners at an AT crossing near the Blue Ridge Parkway with about 8 miles to go for the day.  Loren and I had walked down the trail a ways to wait for them to arrive.  After about an hour, I heard voices, realized it was Eric and Troy, and then noticed they had stopped.  They had not yet spotted me.  If they had seen me and Loren, I imagine Troy may have not let the stream of curse words spew from his mouth.  It turns out he had been stung in the rear by a wasp.  Our male runners were getting a little taste of their own Vespa mandarinia today. Fortunately I had the Flip camera with me and caught Troy's reaction to that incident on film. Adam should be posting a video soon. I was somewhat surprised to see Troy and Eric still together at this point.  I recall Eric telling Troy that he could certainly try to take it out and pull away from him, but doing so on a 100+ heat day might prove detrimental to Troy for the following stage.  Ahh, the psychological games these boys are playing with each other.  This Tour is finally beginning to feel like a race to me.  These guys are serious about competing with each other.  Eric and Troy snagged some more fluids and headed on towards the finish.  Anne came along just 1 hour and 30 minutes after Eric and Troy had come through.  She looked strong as ever, barely pausing to get any aid, and pressed on for the remaining 8 miles.  Another stage was coming to an end for the runners.  7 down, 7 to go. 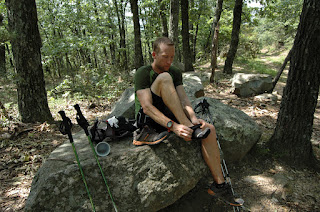 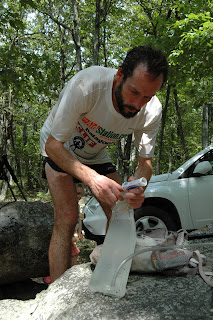 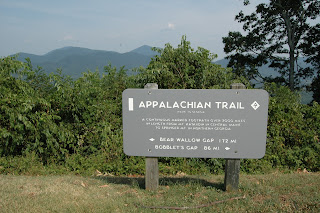