Sophie crewed for our runners again today and posted this note and pics on Facebook:


I met the gang as they were coming into Turk's Branch Gap, about mile 11 from their starting point at Beagle Gap, where they departed at 7:15 am. Eric and Troy were together and they weren't needing much aid at this point and were moving well (about 4mph). Just minutes behind them came Anne, looking solid and strong. Her knee was giving her some issues after falling on it in earlier stages but she was still moving well and of course her attitude was upbeat and determined, which will serve her well in the next few days.I met them two more times along the trail--at Rip Rap (mile 17 for the stage ) and Blackrock (mile 19). Since the weather was cloudy and cool, the trail was so runnable, they had access to aid with all the Shenandoah National Park amenities, and everyone was making such good time, the gang decided to add three miles to the day's stage at the end and then 10 additional miles today (Thursday) in anticipation of the last day's terrain and long miles -- 48-- so these changes will make the last day a shorter day of 35. Good thinking and a smart plan, IMO.Anne and I hiked up to Blackrock together and I was able to snap some great pics which I will post. I also was able to run some sections with Eric and Troy--those guys are moving! Their pace after 400 miles and 10 days was faster than my usual pace on those trails on a good day! Whew!After sharing the beautiful trail with these amazing athletes, I am seriously motivated to consider the Tour de Virginia in the future..." 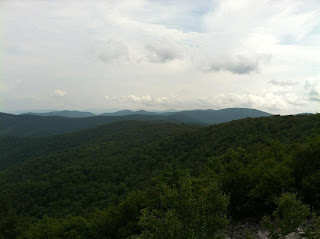 Robin adds:
I spoke with Troy this evening and learned that the runners tacked on an extra 4 miles to their run bringing the total for the day to 39.  I was surprised how energetic Troy sounded.  Knowing they have just 3 days remaining must surely contribute to some extra endorphin production.  If I understood Troy correctly, I think he said his total time for today was 8:44, Eric's time was 8:55, and Anne's time was 10:11.  I'll need to double check that tomorrow.  Troy commented on plans to add an extra 10 miles to their stage tomorrow so instead of the planned 34, they'll be doing 44.  This change of plans is due to the relative ease of the terrain on this section of the trail.  He said they'll be ending at a place called Elk Wallow on Skyline Drive tomorrow evening (Thursday).  I can't wait to hear what tomorrow brings for the runners.
Posted by Robin O G at 6:16 PM