After yesterday's prologue, a 7 mile run from Damascus to the TN/VA border, the Tour de Virginia began in earnest today with a 40 mile trek on the Appalachian Trail from Damascus to VA 603 near Troutdale. Rob French, Anne Riddle Lundblad, Troy Shellhamer, Eric Grossman, and Rebekah Trittipoe set off together on this journey of 550+ miles that will take them from the TN/VA border to Harper's Ferry, W.Va. in 14 days. It's no surprise that this event began as a community affair.  The ultrarunning community is known for being just that, a community.  While not everyone has the guts, stamina, courage, or endurance to tackle 550+ miles in 14 days, there are plenty in the community who are excited to come out and support such a feat.  Today, Jenny Nichols brought her two boys, Jack and Todd, out to support the runners with lemonade, cookies, and other goodies.  With temperatures in the upper 90's to low 100's, the refreshments were a welcome treat.  Guy Love and Rick Gray joined the runners for part of today's run and Beth Minnick came out to support the runners as well.  Thanks, Beth and Jenny, for posting these pictures on Facebook. 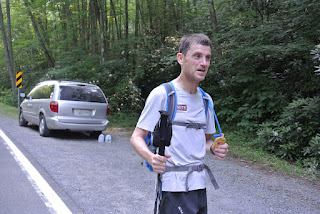 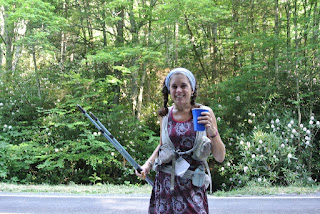 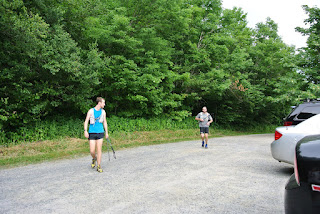 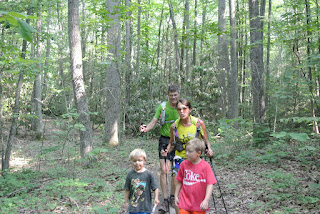 Jack and Todd with Rick Gray and Rebekah Trittipoe 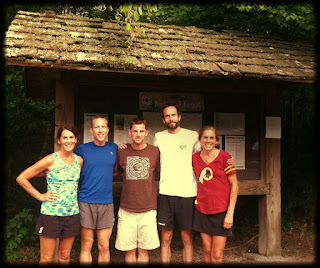 Sunday night brought severe thunderstorms to the area.  While I slept somewhat peacefully in the comfort of my bed, I wondered what was happening with Eric and the runners and crew out on the mountain.  I learned today that the night was better for some than others.  Adam Bolt, a member of the support crew, and Rebekah were unprepared for the storms as they slept in their hammocks.  I hear they ended up inside the van where James, Eric's brother and the other member of the support crew/chef, slept.  Sounds like a cozy night in the van.  I'm certain the runners and crew will have plenty of opportunities to get to know one another in ways not yet anticipated or imagined. I hope to be able to share some of their stories with you here as the next two weeks unfold.