I'm just happy to be here

I don’t really follow basketball so you’ll have to help me understand how a tournament designed to pit the best teams against each other ends up with a final four with none of the top seeded teams. Don’t get me wrong, like a lot of people, I’m thrilled to see Kentucky back in it (I’m a native), and I couldn’t be happier that VCU displaced a top seed (I reside in Virginia). I can’t imagine anyone is actually happy about their bracket, but aren’t a lot of us merrily snickering about mid-major programs like Butler’s becoming a staple of the NCAA tournament? And beyond the mildly malevolent joy of watching a Goliath fall, don’t we also appreciate the humble shrug of athletes who respond to questions about their hopes going into the semi-finals with some version of “I’m just happy to be here.”

Just because a phrase is a cliché doesn’t mean it isn’t important. Athletes do well to cultivate states of mind conducive to top performance. The weight of high expectation can strain athletes’ abilities to stay positive and stay focused. Some dynasties may be so good that this fragility is never exposed. If talent is more evenly distributed, however, the mental side of the game may come into play. A couple of mistakes in a row can be shaken off by a player who wasn’t even expected to make it this far, for example, while the same two mistakes could cause another athlete to feel seriously frustrated. To the extent you can dwell in the present, savor any immediate successes, and avoid a frustrating comparison of what is happening to what you expected, don’t you have a mental advantage?

My races feel most free when I’ve recently come back from injury and sincerely feel that all I want is to run and to enjoy whatever the event may bring me. I cannot realistically expect to run fast, or to even feel good. I’m literally open to anything. The freedom of these races is a joy in itself, but as it happens, my performances suggest that this state of mind is also good for running fast.

Don’t take the fact that I was outpaced by young Jake Reed at last Saturday’s Terrapin 50K as contradicting my conclusion. I did run fast, he just ran faster! We both went under the course record. For the first many miles I kept Jake in sight. I would normally be more comfortable running in front, but I was quite content to hang back. I paid attention to things; tucked my Clif Bloks into my gloves so they would soften up; kept my strides as quick and quiet as possible. It made me smile that Jake seemed worried about me behind him – he kept turning his head to check my position. “Just run,” I said to him in my mind, “you are doing great!” 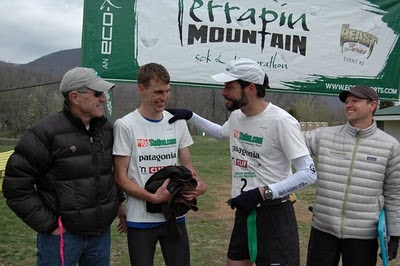 It didn’t bother me that Jake was able to pull away. I had no reason to expect otherwise. He is 23 years old, having recently graduated after successfully competing as a college varsity athlete. He won Promise Land 50K last year -- where we will meet again in a few short weeks. I will be tempted to presume that I am more fit than I thought before running at Terrapin. I will be tempted to expect another good performance. Paradoxically, I will only be able to run my best if I resist these temptations and keep as open a mind as possible. I should not presume anything except that I will show up and run as I am able. And if someone asks how I think I’ll do, I’ll reply: “I’m just happy to be here.”
Posted by Eric Grossman at 12:16 PM 7 comments:

I recall my first long run: trotted out the front door and didn't turn around until I started to feel tired. From Crescent Hill in Louisville I had run to, then through, Cherokee Park. I came out above Big Rock onto Woodbourne Avenue and approached Bardstown Road. I had carried myself to the neighborhood of my aspirations. As nighttime approached I turned and ran back toward home.

My recollection of that midsummer's night run from my youth -- before I had competed in or even had a concept of a distance race -- still gives me pause. Running just bubbled up from somewhere. My brothers and I did typical kid stuff. We rode bikes, played ball in the street, mixed it up with the bullies. A foot race was won or lost within seconds, and status was achieved with bravado. That long run came from another place. I was expanding my boundaries.

We had just returned from a camping trip. Although our family had already started to disintegrate, we could all appreciate something about spending the weekend outside together. We all enjoyed outdoor activity, and though the details are lost to memory, I know we hiked, ran, and played to contented exhaustion. Back home I imagine my Dad quietly puttering around our station wagon, getting the tent and stove put back in the garage. I imagine my brothers plopping down in front of the TV.

The energy demands of the weekend had been high, so a restful evening would have been in order. For me, though, our strenuous activity had just opened the tap. The energy was flowing. I imagine that I got little more than a raised eyebrow when I said I was heading out.

That pattern -- high level exertion followed by exhilaration -- has marked many of my adventures since. The most exhausting work I ever did was leading groups of 11-year olds through the woods in Greenfield, New Hampshire, in 1991. They arrived Monday morning and stayed until Friday noon at which time most of the staff collapsed in their cabins. Every Friday afternoon I ran up Crotched Mountain. When I finished my thru hike of the AT in 1998, I decided to run the Mountain Masochist 50 mile race. It took a while, but that race ultimately launched my ultrarunning.

The energy I can put into running has waxed and waned with many variables – now revolving around my family and work. The story has many layers, but suffice to say that last December I put my running to rest. One reason I had for retiring is that I want my kids to shine without any distracting glare from my successes. They resist when I encourage them to run, and I thought maybe they were uncomfortable being compared with me.

Of course I’m running again. I couldn’t really help it. And the kids run too – when I’m not watching. My son, remarkably, let slip his feelings about my running recently. Once I decided to run Terrapin and Promise Land, I abruptly ramped up my training. With the strain of training again came the familiar risk of injury. Robin expressed her concern that I was taking too big a risk by increasing my mileage so quickly. I replied that by “going for it” at least I’d end up in one of two certain places – either fit or retired. She pleaded with me to be careful and preserve my running career. Gavin, ever alert to his mother’s fears, blurted out that he wanted me to run 100 mile races! I was stunned. “Well alright then,” was about all I could say. Glad we settled that.

Last Friday I ran 13 miles on the rolling country roads around Meadowview. On Saturday I parked at Elk Garden and ran a 5 hour circuit around the Mt. Rogers Recreation Area. On Sunday I ran an 18 mile loop on Iron Mountain, hard. In 2006 I established this loop as a benchmark of my fitness. I determined that when I was able to run under 2 hours for that loop I would be ready to run under 7 hours at Mountain Masochist. Turned out I was right. So in my condition Sunday (old, fat, and tired!) I was hoping to eke out a 2:15. I managed a 2:08. That felt good.

The significant exertions on Friday and Saturday could have tired me out. Thankfully, however, the pattern that emerged in my youth continues. Open up the tap pour yourself out – the water will replenish itself. I hope the well runs deep.
Posted by Eric Grossman at 10:19 AM 2 comments:

I stole a run this morning before another cold rain set in. Yesterday I went out at midday to the “Salt Trail,” a new rails-to-trail that starts in Glade Spring. It’s only a few miles from my house, so I head over there regularly. On a nice day I might see 2 or 3 other folks walking, jogging, or biking. With a steady rain and the temperature at 39 degrees I had the trail to myself. The trail runs to Saltville, which sits 400 feet lower than Glade Spring. So the course sets up as an out and back – gentle down on the way out and gentle up on the way back. I’d prefer to climb first while I’m fresh, but it’s not worth the extra driving. What I do instead is use the out section to get my legs moving. After the first 15 minutes I run 1 minute fast every 3 minutes. The gentle slope makes it feel easy. When I turn around at 30 minutes I’ve gotten 5 of these “striders” in and it’s time to go to work. On the way back I keep the tempo up continuously. The slight uphill makes me work, even though the turnover feels slow compared to my strides from the way out. I finish in 57 minutes, feeling little worse for wear.

So what? Here’s why yesterday’s run was remarkable:
• A couple of months ago I was laid up from hernia surgery and retired from running.
• The weather doesn’t get much worse for running – and I loved it.
• This past Saturday, Sunday, and Monday were the toughest running days I’ve had since I started back.
• During the run I set my goal for this year: to run, and win, four 100 mile races.

The 100 mile race has remained enigmatic to me – and I want to lay it open. Most years since I started running ultras I have entered one 100 mile race each summer. While psychologically manageable, this hasn’t worked as a strategy for optimal performance at that distance. This year I want to focus on 100s. Knowing that I have to manage training for 4 races instead of 1 will affect how I prepare. Each event is not only an end unto itself but also a trial and a stepping stone; a trial because I can still make adjustments; a stepping stone because I have to get through each one in order to reach my goal.

I’m not doing the “Grand Slam” of ultrarunning, or even the “Eastern Slam.” The growth of our sport has created an odd disparity between a few hyper-popular events and many under-utilized venues. So rather than rack my brain, adjust my schedule, and rob my wallet to get into the “biggies,” I’ll drive to events directed by good people and run through awesome countryside. I’ll just call it “Eric’s Slam.”