A Few Words about Promise Land

On the most recent episode of Justified, Boyd Crowder is being interrogated along with his former sister-in-law, Ava, when the ATF officer insinuates a certain, ahem, impropriety on her part. Boyd responds with this statement: “I know you have an investigation to run, sir, but if you disrespect Ava one more time I’m gonna come across this table.” Importantly for the character, we believe him.

True to the cliché, it wasn’t a threat, it was a promise. The distinction is important because threats can be idle, rattled off in haste, and left hanging. Promises, on the other hand, carry a personal guarantee. They speak to the integrity of the individual. When one makes a convincing promise, a potent obligation has been established. One is saying, in effect, this is more important to me than the many forces that might persuade me otherwise (like fighting with a federal agent and going to jail, as in Boyd’s case).

We are rooting for Boyd, even if he happens to be on the wrong side of the law. He is trying to do right. His capacity to make – and keep – a promise, is his best leverage against worldly temptation. And so it is for the rest of us. We inherit the proclivities of our parents; we experience the rewards and pitfalls of our environment; we are ultimately led by the nose to our pastures. Unless… We take stand. We say what we do, and we do what we say. What separates us from all our animal cohabitants on planet earth? We alone live in Promise Land!

Promise Land is where our best selves reside. And it happens, not coincidentally, to be where I plan to race this weekend. Promise Land is a 50+ kilometer course devised and directed by the inestimable David Horton. Most participants will gather on Friday night at a remote church camp in the Blue Ridge Mountains called, you guessed it, Promise Land. We’ll camp, splayed across the grassy field, within sight of the fading glow from a once crackling bonfire. In the wee hours of the morning car doors will start to open and close as runners begin anxious preparations – applying lubricant, adjusting clothes and shoes, and pinning on numbers. At 5:30, after a brief prayer, Horton will send us out to climb the mountain, cross it, and then come back again from the other side. Our final ascent is up Apple Orchard Falls. After scrabbling around loose rock and larger boulders, we’ll mount countless steps before crossing the Blue Ridge Parkway for the final time. From there the race is an oxygen-deprived, but mercifully downhill, blur. We’ll arrive back at camp, all guns blazing. To me, Promise Land is the perfect race. 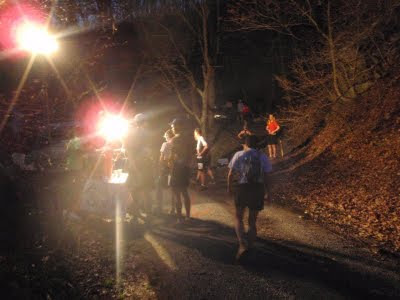 Runners who set out to run any ultramarathon are stepping into Promise Land. We are setting an ambitious goal. We announce our intentions, we sign up for the race, and we do the training that will be required to achieve our goal. That speaks to character. As anyone who has dealt with a runner can likely attest, we are hard to dissuade from our efforts. How could it be any other way? Our promises lead us to Promise Land!
Posted by Eric Grossman at 12:05 PM