You likely have heard that continents move. Two related facts strike me as important. First, almost nobody believed this was possible until the late 1960s. This is the GROUND we walk on, and we were WRONG about it – even as we’re landing on the moon. Wow. Second fact, continents move about the same speed as toenails grow. OK, you heard it was fingernails. Same speed though, and this is a post about ultrarunning. We frequently talk about toenails. As it happens, I lost my left big toenail last June during the Western States 100. It hurt. Nothing earth-shattering, nor was it particularly significant to my run. I also sprained my right ankle, though. It hurt too. And kept hurting – for the last 90 miles of the run – and then for the next several months. I was forced to layoff of running. I tried to rush my return and was repeatedly repulsed. I finally relented and took up cycling for the fall. Riding hard up a mountain is almost as fun as running up it. 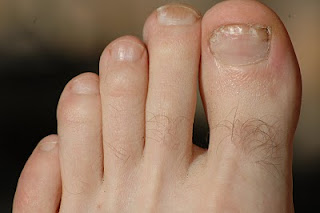 As you can tell from the picture, my toenail is back. Six months – 1.25 centimeters. And while a transatlantic flight hasn’t gotten appreciably longer, enough of my bodily tissue has regenerated that I can run again. I trained through November and December, in fact, and marked my official return to ultramarathons last Saturday. This inaugural event was aptly named Frozen Sasquatch. The hearty West Virginians were unfazed by the blustery conditions. Volunteers cheerily handed out Heed slushies at the aid stations. First time RD Mike Dolin contrived a 25K loop through the Kanawha State Forest in Charleston. The ultra option was 2 loops, of course. For front runners, this provided more variety than you might guess. On the first loop we got to break trail in the fresh snow, and on the second loop we did our best to stay upright on the compacted – and icy – steep slopes.

In the midst of my hiatus from running I realized that I want to do more local and regional events in 2010. The lure of big national events and great competition has gotten me to cross the continent several times in the last couple years. I’ve enjoyed many runs in California – Quad Dipsea, Miwok, Way Too Cool, American River, and of course Western States. I’ve missed the runs that got me into ultras to begin with, though. Homespun events in the Appalachian States are still my favorite. I felt right at home with Sasquatch. About 100 runners. Narrow single track winding crazily through the woods. Plenty of climbing. Nervous bantering with friends beforehand and relaxed bantering with friends afterward.

Here’s what I like about ultras. We leave our warm cozy homes before dawn on a bleak winter day. We gather together in the woods until someone says “go” and then proceed to chase down two-foot strips of blue flagging hanging from bare tree branches. We climb brutish slopes until every panted breath blows spit that freezes to our chins. After several hours of extreme exertion we wind up right where we started with nothing gained but a voracious need to replenish ourselves. And it feels natural.

The continents drift. That’s how we get volcanoes and mountains and mid-ocean ridges. People run. We use it to show our specially developed talents, yes, but we can do that because running is the birthright of any healthy person.

I enjoyed standing around the finish, trying to stay warm by a small fire, and watching runners finish. They may have been cussing all the way down the remarkably treacherous last descent, but now, to a person, they celebrated. We call it “accomplishment.” I think it represents the collective and emphatic demonstration of what suitably determined people can do. Just give it time (2-3 cm per year).
Posted by Eric Grossman at 11:43 AM