Out of the Canyon 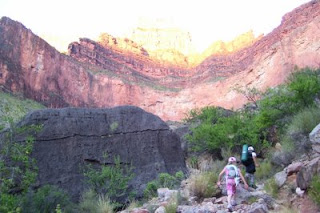 Question: what should you expect if you take your 7-year-old daughter and 9-year-old son on their first overnight backpacking trip down 4000 vertical feet into the Grand Canyon on the unmaintained Hermit's trail in mid-June?

Within 30 minutes of beginning the 9-mile hike from our campsite at Monument Creek back out of the canyon, Catherine threw her hydration pack off her shoulders, let out a big sigh, and starting swinging the bite-valve around, flinging out precious water. She dragged her feet, ambling at about a half-mile per hour pace.

She had held up pretty well on the hike down. It had been unseasonably cool. She did ask how far we had to go a lot. A couple of times she sat down abruptly on a rock. I wasn't sure she would get back up. She did.

Today promised to be hot. We got up at 4am. I gambled that we would make the spring on Hermit's trail in good time, and packed minimal water to save the weight. We packed, had breakfast, and left a little after 5am. I assigned Gavin to lead the first section. I planned to have Catherine lead the first real climb up toward Cathedral Staircase.

She hadn’t eaten much. We packed exactly the food we needed, so when she rejected what we offered her, there were no options.

Now we faced a tough, and potentially dangerous, hike. I pictured baking in the midday sun, short-roping Catherine, and running out of water. I grabbed her bite-valve, lowered my face to hers, and told her she could cause us all potential harm.

She didn’t speak to me for a long time after that. I walked behind her while she moved convulsively in front of me. It was like she was of 2 minds. One wanted to let loose and stride down the slight hill to catch her brother and mother, the other seized her legs with every step. The result was an odd, straight-legged gait, like she was wearing leg braces.

When we started the climb, we put Catherine in the lead. She dragged for a little while, but gradually picked up speed. We were quiet about it, but she put distance on us a few times when we struggled with our packs up some technical sections. Catherine loves rock-hopping. Back home in the high country of Virginia she has proved herself by running from Massie to Rhododendron Gap and back, a distance of about 5 miles. The only catch – we have to let her take her shoes off. More than anything she craves freedom. So we left her alone as she assumed the lead. She turned a few times, told us to get moving.

Well, she never slowed down. We climbed out of the canyon in 4 ½ hours. The hike down had taken much longer. Robin asked what had changed. She said she started singing to herself.

We’re in Williams, AZ. We’ve been too busy with our own adventure to worry over the rest of the world. We are pausing for a few minutes today en route to hotter climes. The elevation phase of my acclimatization plan is complete. Now I need a few days of heat. Gavin likes to gamble, so we’re heading to Vegas.

The final evidence I needed to confirm the efficacy of my altitude training came on the Thursday we left Colorado Springs. I did the team CRUD tempo run for the second time. My first attempt at climbing to within 7.8 miles of Pike’s Peak took over 51 minutes. On my second attempt, after I’d had 2 more weeks to acclimate to the altitude, I was able to run the same climb in just over 47 minutes.

Bring on the heat.